For Diamond Rocks, supporting charities has always been an important part of what we do.  We have been helping to raise funds for several different charities from Breast Cancer Care, to Comic Relief and many more – each with their own unique and vital cause.

We have also donated to smaller charities such as Wings for Life, Link Age Southwark, Foresters’ Fund For Children to name a few.  It has been a privilege to have been able to help so many different organisations, some of which you can find below.

Diamond Rocks was excited to support the Macmillan Ball on 25th November 2021 at the V&A Museum.  The ball was attended by 300 people who generously donated on the night.  The aim of the ball was to raise funds for people living with cancer.

Diamond Rocks was delighted to donate a heart shaped pendant which was used in the live auction on the night.  The pendant raised an amazing £2,000 for the fantastic charity.

In September 2021, we supported the All Things Fashionista, Diversity Catwalk Show as part of London Fashion Week. The aim of this show was to showcase diversity from all perspectives be that BAME, Gender, LGBTQ+, Disability and plus size models. There were 10 designers dressing over 30 models and it was definitely a night to remember!

Diamond Rocks was delighted to donate a heart shaped pendant in order to support a raffle that was raising money for two charities, Dementia UK and the Kaleidoscope Foundation supporting disabled people to start their own enterprises.

Helping Hands Charitable Trust (HHCT) has been carrying out relief operations in India, in response to the Covid-19 pandemic.  They have responded to the medical crisis by providing medical equipment, protective gear, medicines, supporting treatment, providing training support to nurses and conducting medical camps as well as supplying oxygen concentrators to those facing medical emergencies.

Diamond Rocks has donated £5,000 towards the relief efforts of Helping Hands.

Diamond Rocks is again proud to support this wonderful charity taking children on a magical holiday of a lifetime to Orlando Florida.

Dreamflight’s November Ball 2019 at Hilton T5 saw around 600 guests come together this time and raise a staggering, record-breaking £160,750 for the charity in one night.  Enough to send 46 seriously ill or disabled children on holiday to Disneyland Florida for 10-day fun-filled days they will remember forever!  Our donations from Diamond Rocks raised £5,000 on the night towards this wonderful charity. 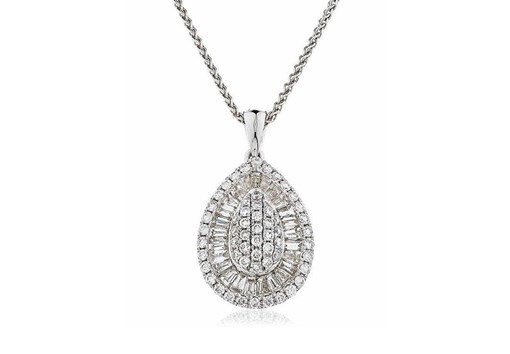 Held annually to raise money to take children on a magical holiday of a lifetime to Orlando Florida, Dreamflight’s November Ball saw 600 incredible guests come together to raise a staggering, record-breaking £152,254 for the charity in one night. That’s enough to send 43 seriously ill or disabled children on holiday to Disneyland Florida on a 10-day trip without their parents.

Diamond Rocks were proud to donate an 18-carat white gold tennis bracelet, set with 1.83 carats of round brilliant cut claw set diamonds, as well as a sparkly 18 carat white gold pendant necklace, set with 1.00 carat of round brilliant and baguette cut diamonds. We were pleased to hear that the two items raised an incredible £8,500 for Dreamflight – a sum alone that more than funds two children’s ten-day trip.

Diamond Rocks were proud to donate an 18-carat white gold tennis bracelet, set with 1.83 carats of round brilliant cut claw set diamonds, as well as a sparkly 18 carat white gold pendant necklace, set with 1.00 carat of round brilliant and baguette cut diamonds. We were pleased to hear that the two items raised an incredible £8,500 for Dreamflight – a sum alone that more than funds two children’s ten-day trip. 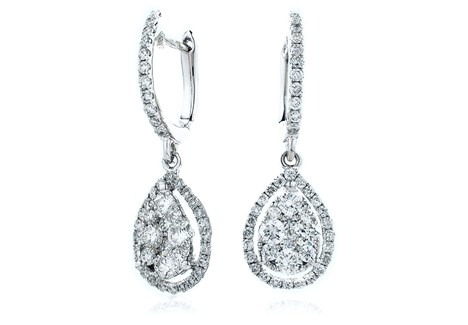 The annual BT Sport Relief Ball took place at Grosvenor House Hotel in London. Keen to support such a worthy cause, Diamond Rocks donated these stunning diamond earrings for the charity auction, raising £2,750. It was a terrific evening and in total the event raised an astonishing amount to help people live happier, healthier, safer lives in the UK and around the world. 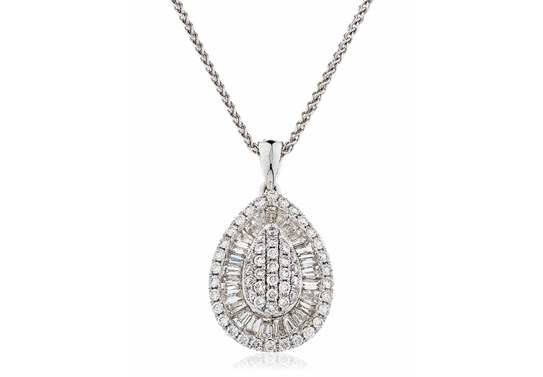 Dreamflight is a fantastic UK charity for seriously ill or disabled children, which raises enough money each year to take 192 children away to Orlando, Florida for a once in a lifetime holiday. Being accompanied for 24 hours a day by doctors, physiotherapists and medical carers – but without their parents – gives them the opportunity to discover confidence, independence and a new lease on life.

Diamond Rocks was privileged to support their efforts at The Mad Hatters Garden Party Auction in 2010 and 2017. In 2017 we donated a one carat diamond pendant in 18K White Gold for the event which we were delighted to hear raised £7,000. 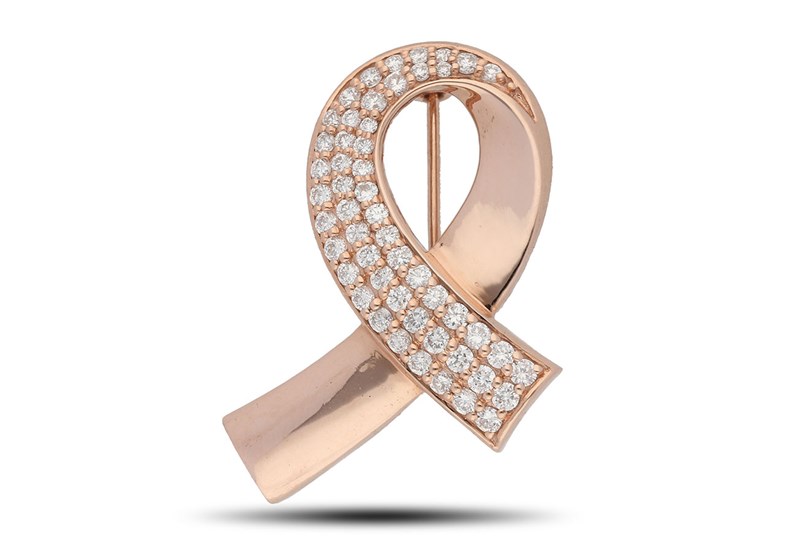 In 2017, we were delighted to have the chance to design an 18K rose gold ribbon brooch with 52 brilliant cut diamonds which proceeded to raise £5,945 for Breast Cancer Care. 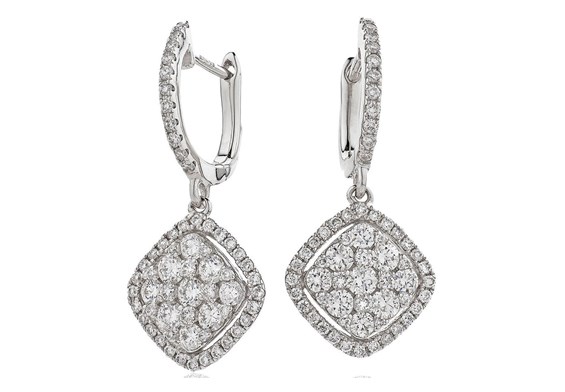 Most recently in 2016 we were able to donate a beautiful pair of diamond earrings for the 2016 BT Sport Relief Ball at the Grosvenor House Hotel – which went on to raise another £5,100. It was a pleasure to be able to donate on three occasions to Sport Relief, which is such a great cause, helping people living the toughest of lives both in the UK and overseas.

In 2015 we donated another diamond to the cause, which helped their lock and key auction raise £5,785 as part of their fashion event The Show.

In 2014 Diamond Rocks continued their support by donating a beautiful one carat GIA Certified Marquise Shape Diamond (H Colour SI1 Clarity) to the Breast Cancer Care Fashion Show - which raised £6,000 for the cause. The Show was a tremendous success and the social media feeds were alive with chatter centred around the benefit. Professional make-up artists, some of the best-known designers, and a wide range of celebrities were hard at work to make this event one to remember. 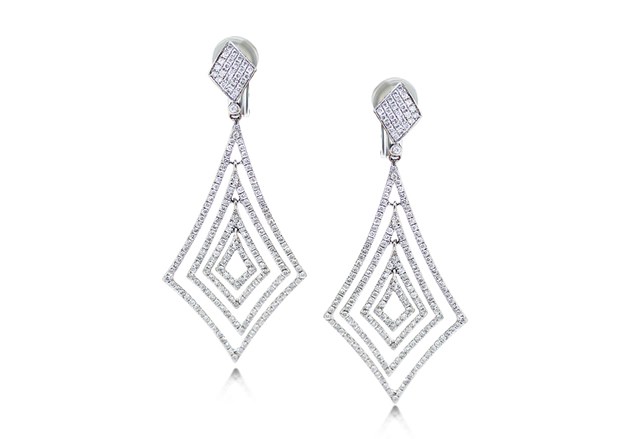 In 2014 Diamond Rocks continued their support by donating a pair of 2.40 carat diamond drop earrings in 18K white gold to the Sport Relief Ball to help try and raise the event target total of £350,000. The earrings were subsequently sold to the highest bidder, raising £5,100 for the cause. As every year, the event was attended by sporting stars and celebrities such as Graeme Swann, Jake Humphrey and John Bishop. 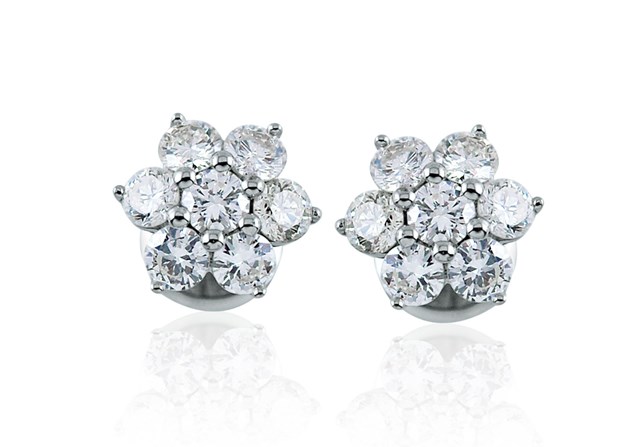 Comic Relief has many great ways of raising money with Sport Relief being one of them and Red Nose Day being another. That’s why in 2013 Diamond Rocks chose to continue its support by donating a beautiful pair of diamond earrings which raised £1,500 in the auction. All the money raised for Red Nose Day helps to change the lives of so many in the UK and abroad – be that those living with mental health issues or suffering from domestic abuse in the UK, to providing immunisation and education for the most vulnerable in Africa. Diamond Rocks is absolutely delighted to have been able to help with such great causes.

In 2012 Diamond Rocks first began supporting Sport Relief by donating two items for the silent auction – a diamond pendant with 1.12 carat diamonds with an 18K white gold chain, and 1.00 carat diamond earrings in 18K white gold. The two items were given to aid BT, who sponsor the event, reach their fundraising target of £1m. It was a star-studded evening attended by sportspeople and celebrities alike, including John Bishop, Will Young and Edith Bowman.

Deciding to support The Children’s Trust was easy – it is the UK’s leading charity helping children living with brain injuries. They offer rehabilitation, education and other services to these children and their families helping them to live their lives to the fullest – a truly fantastic cause. For that reason, in 2012, Diamond Rocks donated a full 0.5 carat 18K white gold eternity ring to be sold in the silent auction at their Charity Ball, which was sponsored by NEXT and succeeded in raising a great deal of money for the cause.

THE FORESTERS' FUND FOR CHILDREN - A FRIENDS FOR LIFE APPEAL 2012

Diamond Rocks was delighted to support The FFFC’s “A Friend For Life Appeal” in 2012 – which provides support through grants and other equipment to many charities and organisations in the UK which promote a better life for children.

Diamond Rocks has long been a supporter of Breast Cancer Care – and donating to their cause was an easy decision, and one we hope will help the efforts of the medical community as they work hard to find the much sought-after cure. In honour of the many women who battle the disease each year, Diamond Rocks began its support in 2010 by donating two pieces of diamond jewellery worth £8,000 to NEXT Retail’s Breast Cancer Care Ball.

The Velindre Cancer Centre based in Wales provides specialist cancer treatment to 1.5 million people in Wales and the South of England. Their fundraising appeal, “Stepping Stones”, specifically aims to combat lung cancer – which is the most common cause of cancer death in England and Wales.

Social isolation among older people is a massive problem across the UK – so Diamond Rocks was delighted to have the opportunity to support Link Age Southwark in 2010. The organisation aims to reduce this isolation by providing lots of activities for the elderly from social groups, to gardening & DIY and services for those living with dementia. The organisation was formerly two charities known as Dulwich Helpline and Southwark Churches Care, but merged in 2015 to become Link Age Southwark. To support, Diamond Rocks made a generous donation to someone running the London Marathon who was raising money for the charity.