There isn’t anyone who is not aware of the marvellous features of a diamond. It is not only used for jewellery, but also used for several other purposes. A diamond is the hardest substance known to man on earth so there are a variety of different uses for it.

How hard is a diamond?

A diamond is 58 times harder than the next hardest mineral on earth, which is corundum. This is the mineral from which other stones, such as rubies and sapphires, are formed. In the fifteenth century it was discovered that only diamonds could cut other diamonds. Yet, despite this seeming impossibility, diamonds are brittle. If diamonds are hit with a hammer, they will shatter into lots of small pieces, or even splinter.

Besides jewellery, diamonds are used for other purposes as well. For instance, there are several industrial applications in which diamonds are useful. Several artificial stones in this category have also been developed in order to meet the industrial demands.

Following are a few of the uses besides jewellery. 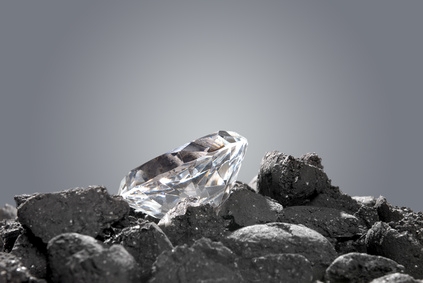 What makes it hard?

As is common knowledge, the main ingredient found in diamond is Carbon. This element is found everywhere; in the atmosphere, in the air, and even beneath the earth’s surface. Carbon atoms come closer to each other under extreme pressure and heat inside the earth. Due to heating, it becomes possible for these atoms to accept each other easily. Pressure plays a significant role in bringing them closer. At last, when they are joined together, they form an unbreakable bond. Due to continuous compression, the newly formed substance gets harder. The compression continues and it does not stop even after the formation of this stone. Hence the hardening of this newly developed natural substance also goes on, and when it reaches human hands, it has already acquired the shape of the hardest substance on earth.

In conclusion, any substance which is passed through extreme pressure and heat can become harder. However, in the case of diamond, it is the hardest substance on earth since no object exists which has passed through such an amount of heat and pressure beneath the earth’s surface. The hardness of a diamond is unmatched. Many people feel that the beauty of a diamond is also unmatched.