Magazine Jewellery Inspiration A Guide to

One of the great things about living in our multi cultural society is the rich diversity of different religious and cultural festivals that bring people together to mark important moments in their faith and share their culture. In many cases, these celebrations are an opportunity to exchange gifts with loved ones. And what better way to do that than with jewellery, the most personal form of adornment? Jewellery has been used as a symbol of spiritual devotion for thousands of years. The Ancient Egyptians believed that amuletic jewels were the keys to the afterlife, filling pyramids with them and placing them all over the body before mummification.

They made jewellery out of fine metals and precious gems, often featuring natural symbols, such as the lotus, beetle, falcon and serpent, to represent the deities they worshipped. The Greeks and Romans crafted jewellery out of gold to express their veneration of the gods. And, the Mayans and Aztecs, believing in the mystical value of jewels, offered emeralds, turquoise and jade to their gods by pushing them out to sea. Today, religious symbols are markers for the faiths to which we belong. From the Christian crucifix to the Islamic crescent moon, the Jewish Star of David to the Sikh khanda (a double-edged sword that represents the belief in one God), each one is steeped in religious and cultural tradition.

So iconic are these symbols that many have also become fashion statements and a source of inspiration for designers. In 2018, an exhibition at the Metropolitan Museum of Art in New York illustrated how religion is inextricably intertwined with the art of jewellery making, featuring many treasures from the Vatican, including a tiara encrusted with 18,000 diamonds that once belonged to Pope Pius IX. If you’re looking for something a little less ostentatious but with equally divine qualities, we can help. Here are five of our most popular faith-based pieces with some handy facts and tips on when best to present them.

Buddhism: the Wheel of Dharma

Buddhist jewellery often features inspirational sayings or motifs like the lotus flower, Buddha and yin-yang. The Wheel of Dharma, or ‘Dharmachakra’, is one of the oldest and most important sacred symbols and, therefore, a popular choice when it comes to jewellery.

It can be interpreted in several ways but generally refers to an eight-spoked wheel, representing the Noble Eight-fold Path that Buddhists must follow in order to lead a virtuous and righteous life.

While the rim of the wheel signifies the ability to hold the teachings of Buddha together by meditating and concentrating, the circular shape symbolises the perfection of the teachings, as well as continued rebirth until one attains awakening. And the central hub represents moral discipline. There are many different Buddhist festivals around the world with ‘Wesak’ the main Buddhist festival of the year, also known a ‘Buddha Day’, when the faithful celebrate the Buddha’s birth, enlightenment and death. 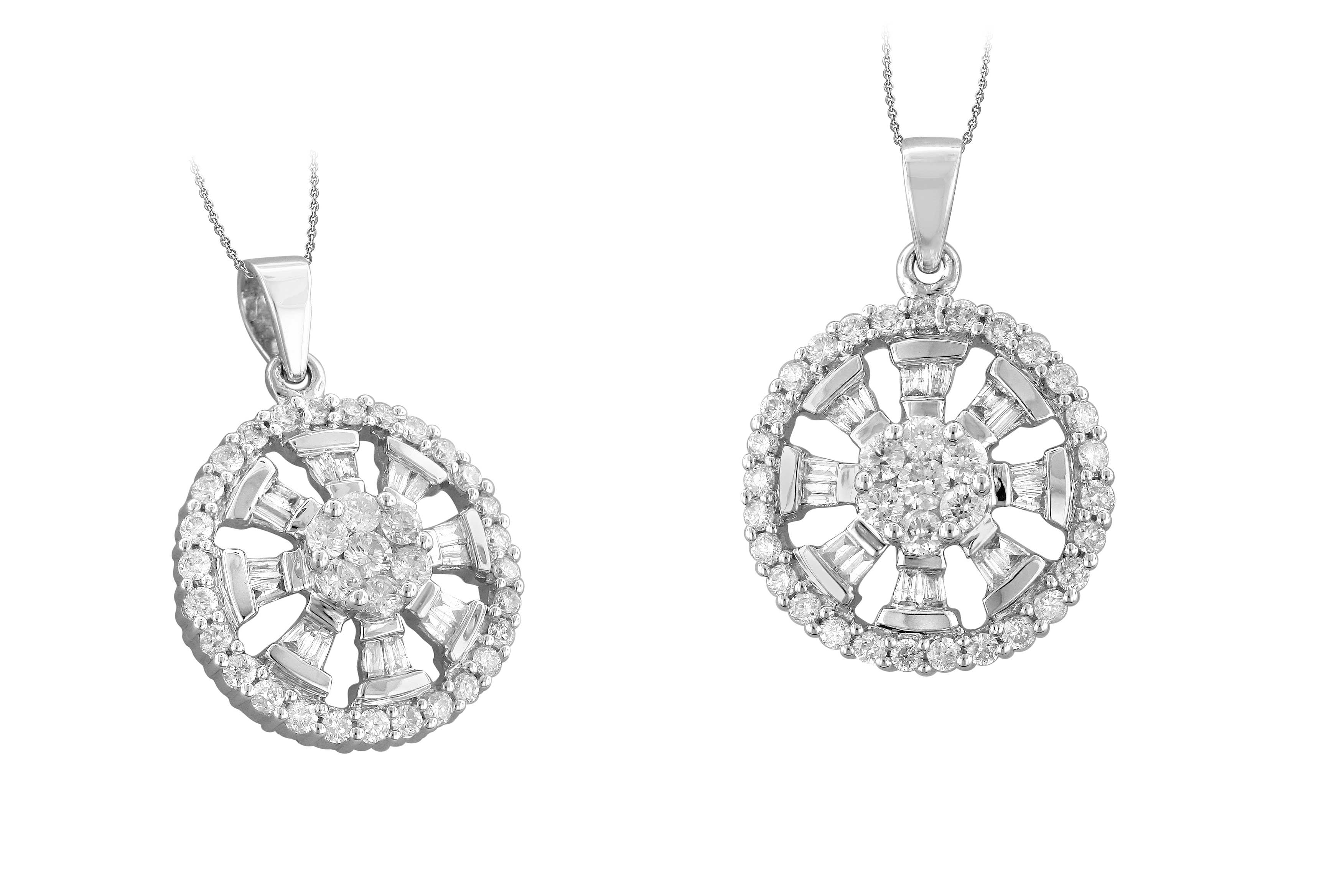 This wheel brilliant-cut cluster pendant and chain, featuring one carat of exceptional diamonds, is a stunning interpretation of this spiritual symbol and would make truly elegant gift.

Christian jewellery dates back to before the Crusades, when St Constantine Christianised the Roman Empire. Popular pieces include rosaries, medals of the saints and guardian angel pins, but the cross remains its ultimate symbol. 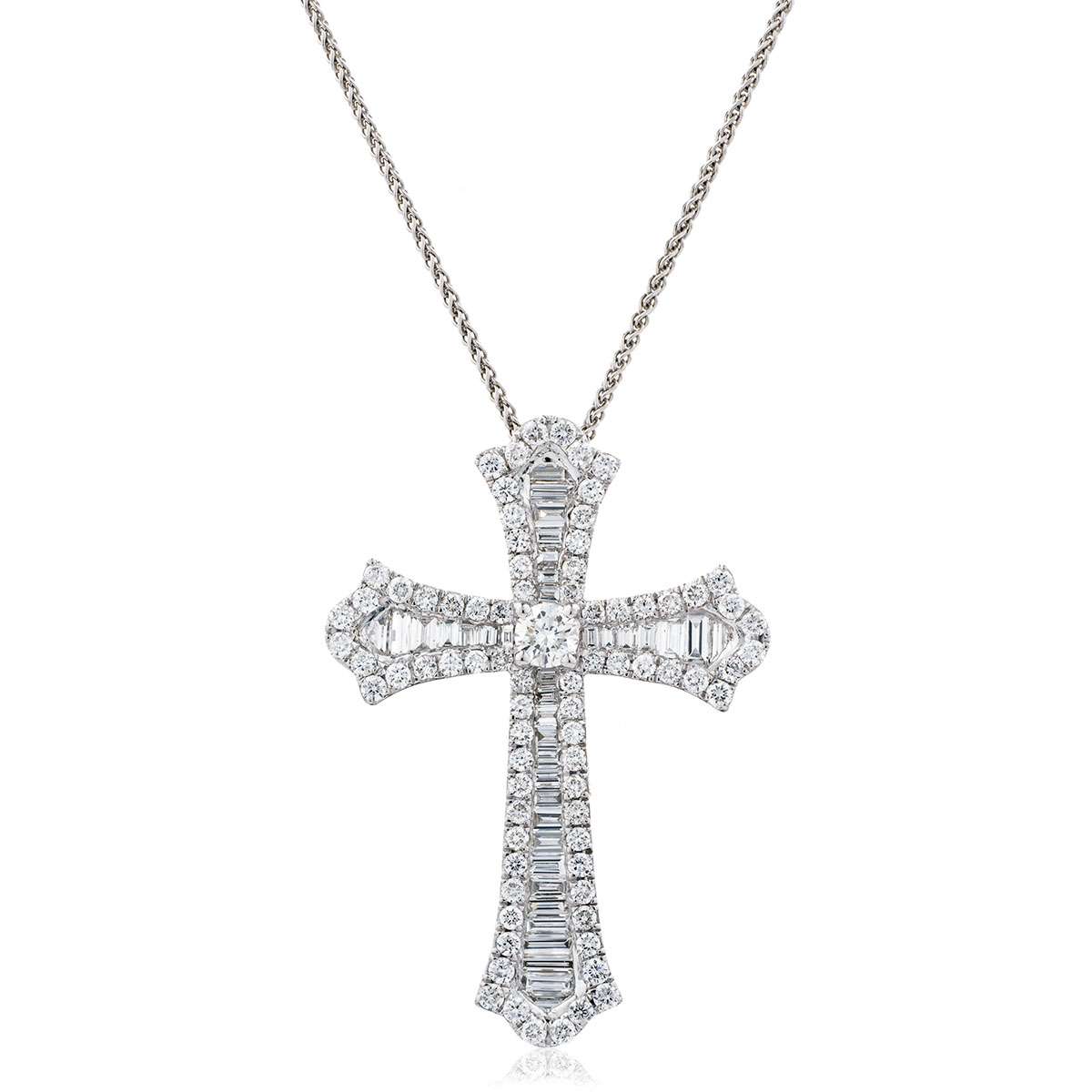 Its antique-inspired design gives the piece a truly majestic feel. A cross and chain is often given to commemorate a religious milestone, such as a baptism or first communion.

It also makes an ideal gift during Christian holidays, especially at Easter, which celebrates the resurrection of Christ following his crucifixion on the cross. Whether you choose a cross made of plain silver, gold or platinum for an understated look, or encrusted with diamonds for added beauty, its meaning is unmistakable. 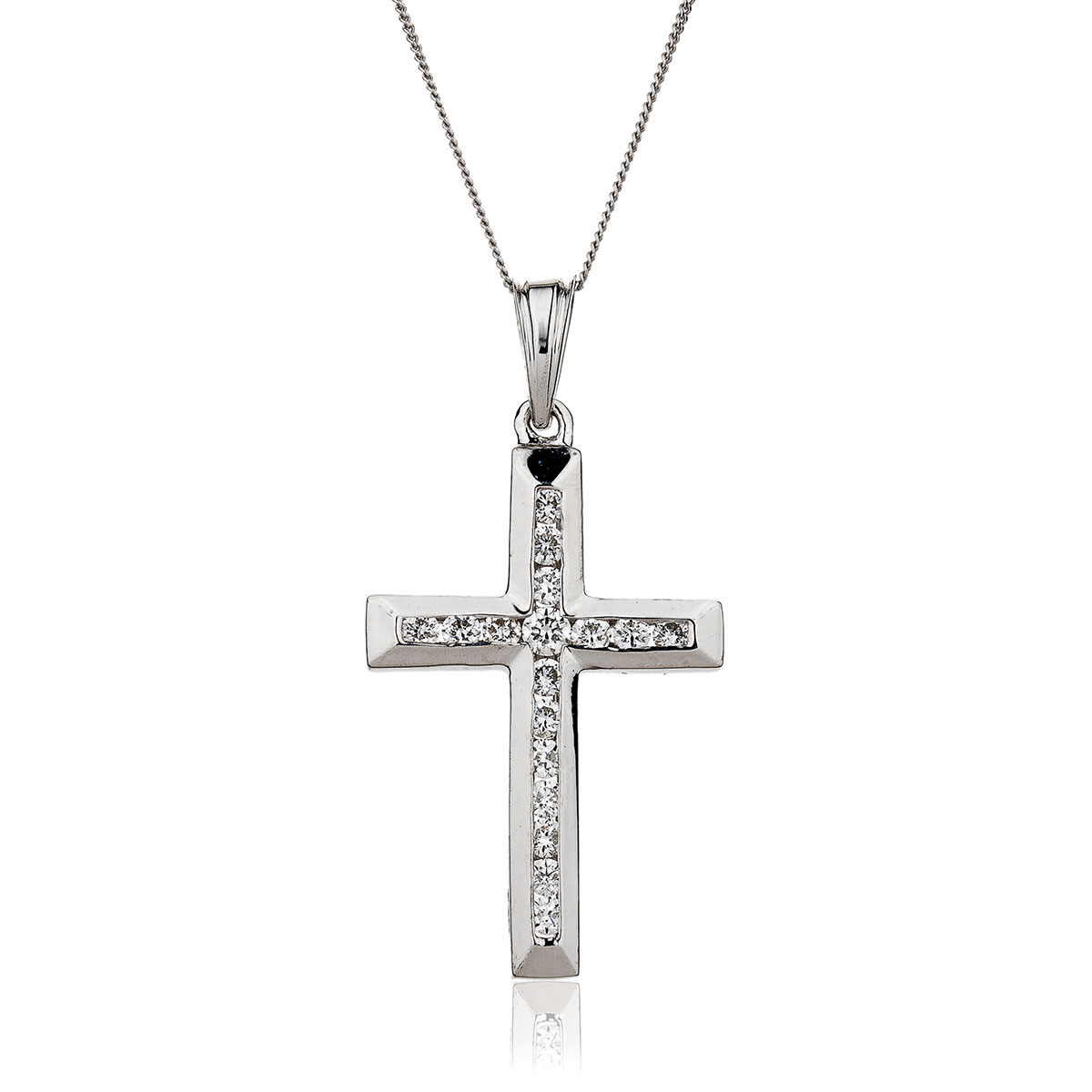 If you’re looking for something a little more subtle, this simple yet elegant round brilliant diamond cross pendant, features a discreet cross of diamonds (one carat in total) set in 18ct white gold. Perfect for everyday wear while still a bit special.

Jewellery in the Hindu culture has been a significant adornment for Indian women throughout the centuries and also symbolises wealth, power and status.

There are many auspicious occasions where jewellery gifts are given, not only due to the traditions but also certain beliefs dating back to ancient times. Some necklaces or pendants, for example, are worn as it is believed to bring good luck and ward off the evil eye. Hindu jewellery includes pieces such as Shanti charms and Om bracelets and pendants.

The Om is a sacred sound that unifies everything in the universe. Its vibrations are thought to energize the chakras (the spiritual energy centres within the human body, of which there are seven along the spine and through the neck and the crown of the head) throughout the body. The symbol that represents the sound is believed to illustrate unity between the ‘three worlds’: earth, heaven and atmosphere.

One of the major Hindu festivals, Diwali, spiritually signifies the victory of light over darkness, good over evil, knowledge over ignorance and hope over despair. Celebrations include lighting ‘diyas’ (lamps and candles), praying to Lakshmi (the goddess of fertility and prosperity), feasting and exchanging gifts between family members and friends. 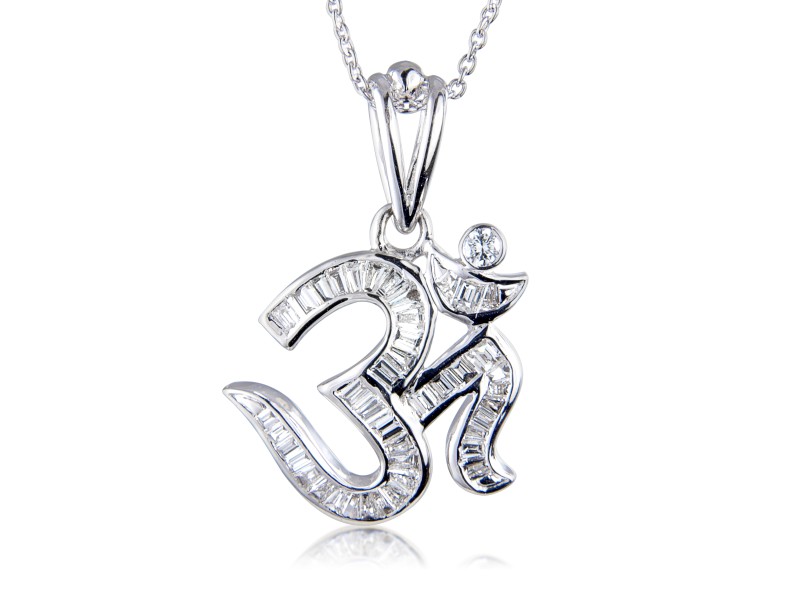 It is the ideal time to present a loved one a with piece of jewellery, such as this round brilliant cut and baguette diamond Om pendant, set in 18ct white gold.

For people of the Muslim faith, there are many jewellery options, including star and crescent charms, Arabic faith message pendants, Allah necklaces and tasbih prayer beads. The Hamsa hand also has great significance. Muslims call it the Hand of Fatima, in honour of one of the daughters of the Prophet Mohammed. According to tradition, the five fingers represent the Five Pillars of Islam. It is believed to offer happiness, good fortune, peace and protection.

For Muslims the annual three-day festival at the end of Ramadan (a month of fasting during daylight hours) is a popular time for gift-giving. Around the world they celebrate Eid al-Fitr, which roughly translates as ‘the festival of breaking the fast’, when they engage in acts of kindness and charity, and finish with a feast. 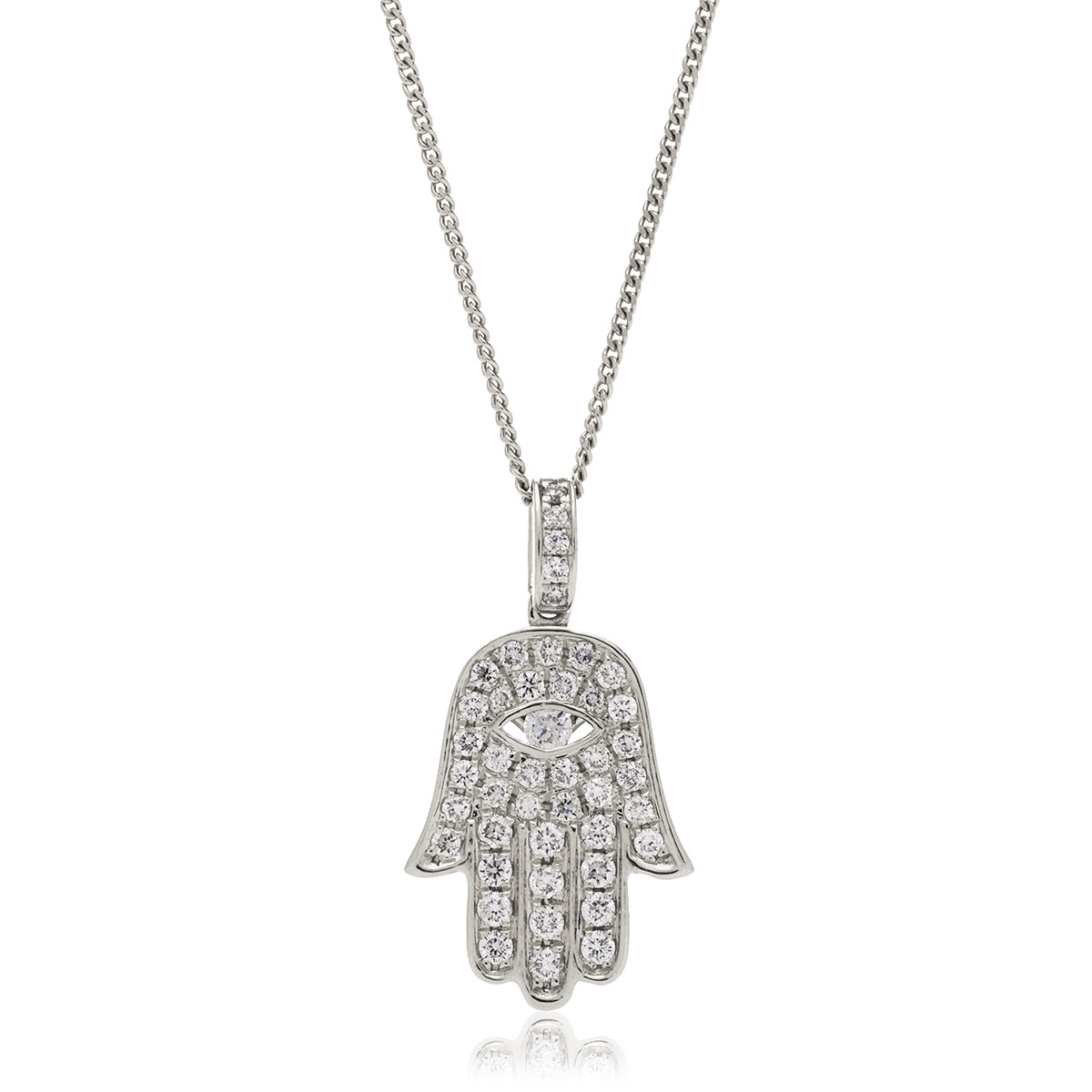 The Hamsa hand features in many pieces of Islamic jewellery and would also be the perfect gift for an Aqiqah celebration, the naming ceremony performed seven days after the birth of a baby.  Check out this stunning Hamsa hand diamond pendant and chain, set in 18ct white gold.

Judaism: the Star of David

Jewish jewellery comes in many different forms, but probably the most commonly known is the Star of David. Named after King David of Israel, this is a six-apex star that symbolises the Jewish nation and faith.

Jewellery featuring the symbol has a double significance, as it is thought to bring good fortune, wealth and joy, as well as save the wearer from misfortune. It is the perfect gift for a Bar Mitzvah or Bat Mitzvah, when Jewish boys and girls celebrate coming of age at 13. 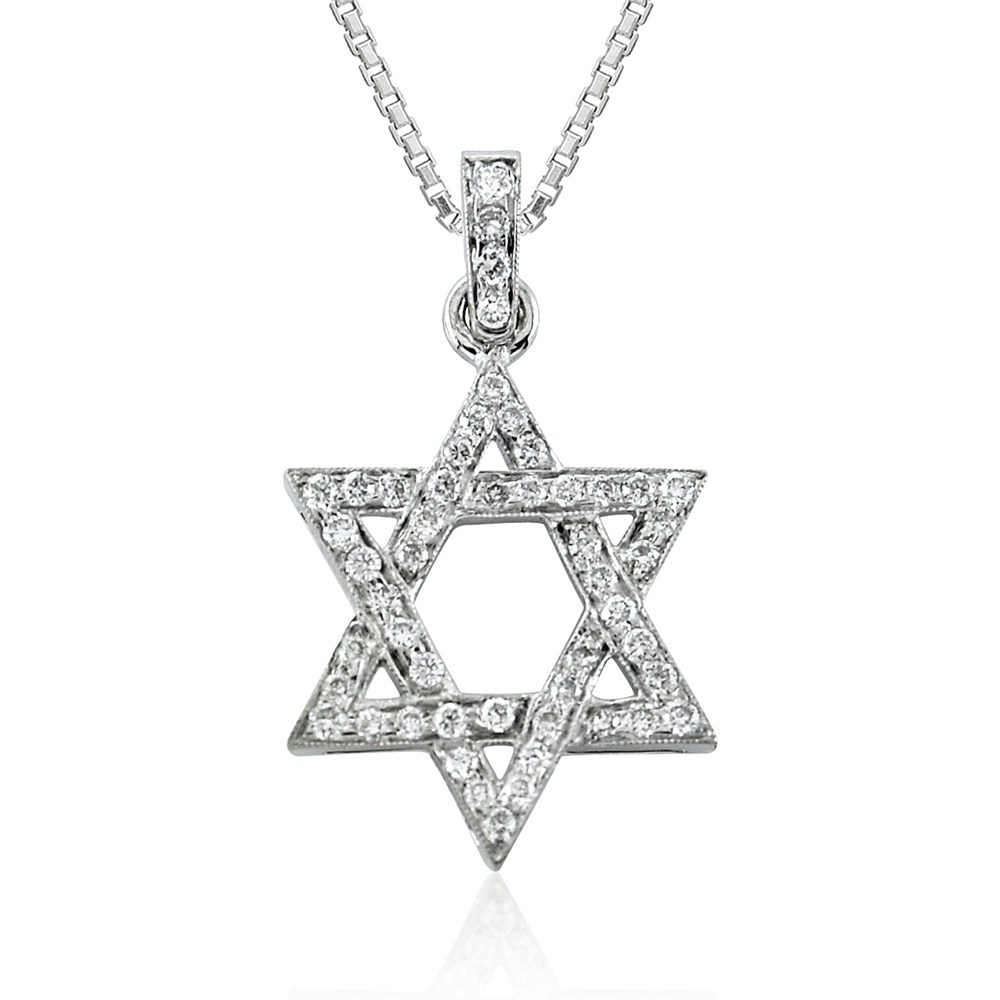 If you’d like any help choosing a piece of jewellery for a loved one or would like to talk to us about creating a bespoke piece, then contact Diamond Rocks to make an appointment.