Did you know that emeralds are even rarer than diamonds and that baby oil gives them extra protection? If not, you’ve come to the right place. In the second instalment of our '10 things…' series we delve into the fascinating, distinctly green world of this precious gemstone.

The oldest emeralds date back almost three billion years. However, they were first mined in Egypt around 1500BC, where it was believed that emeralds stood for fertility and rebirth. Mummies were often buried with them to symbolise eternal youth. The Incas and Aztecs also valued these rich green gems, worshipping them as gods.

So perhaps not surprising, then, that the world’s best emeralds come from South America. Today, Colombia yields the largest number of emeralds, contributing to more than 50% of worldwide production.

One of four gemstones globally recognised as ‘precious’ (the others being diamonds, sapphires and rubies), emeralds are made from beryl. They get their green colour from trace amounts of chromium and/or vanadium. Unlike the other precious stones, which can be found in a variety of colours, emeralds are only ever green, though their hues range from yellow-green to deep jade.

The palest stones are not actually emeralds, but rather known as green beryl. The most desirable emerald colours are bluish-green to green, with vivid saturation and medium to medium-dark tone. 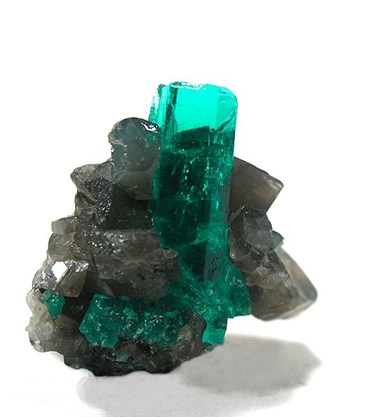 3. Emeralds are rarer and often more expensive than diamonds

When it comes to rare and expensive gemstones, most of us immediately think of diamonds, but, in fact, emeralds are more than 20 times rarer than diamonds and, therefore, often command a higher price. That said, emeralds are an ideal option for those looking to maximise size of stone with budget, since they appear larger than a diamond of the same carat weight because they are less dense.

The Gachala emerald found in Colombia in 1967 weighs 858 carats and is among the world's largest and most famous examples of the stone. At a mere 200 carats, the Mogul Mughal isn’t quite as hefty but is the world’s largest inscribed emerald, featuring the words of a Shi’a Muslim prayer in Naskh script. In 2001, it was sold at auction for $2.2 million.

4. Nearly all emeralds have inclusions

Unlike diamonds, where clarity plays a significant role in valuing a stone, inclusions are to be expected in emeralds. Indeed, they can be found in 99% of natural emeralds so if you find a stone without, chances are it’s synthetic. The inclusions are formed of gases, other minerals and crystals, and liquids that emeralds take on during the crystallisation process and are often viewed as desirable features. Known as ‘jardin’ (French for garden) in the trade, they can create attractive patterns, making no two stones the same, which actually increases the value of the gem. Emerald clarity refers to what the stone looks like on the inside and is usually assessed with the naked eye, rather than under magnification. Due to their inherent inclusions, emeralds are often treated with oils or resins to enhance their clarity and improve their quality and grade.

Variations in colour and inclusion are part of the natural beauty of emeralds.  Find our more with our Precious Stones Guide to Emeralds.

5. Emeralds are the softest gems known to man

While inclusions can add to an emerald’s overall aesthetic, they do make them more susceptible to cracking if knocked against a hard surface or subjected to extreme temperature change. Most emeralds are, therefore, treated by filling cracks with oil to prevent chipping. Consequently, an emerald should never be cleaned with chemicals or an ultrasound machine. Instead, simply use warm water to rinse away any dirt, allow to dry and then rub with a soft cloth. You can also coat emeralds with baby oil as an extra precaution to help prevent the stone from becoming overly brittle. 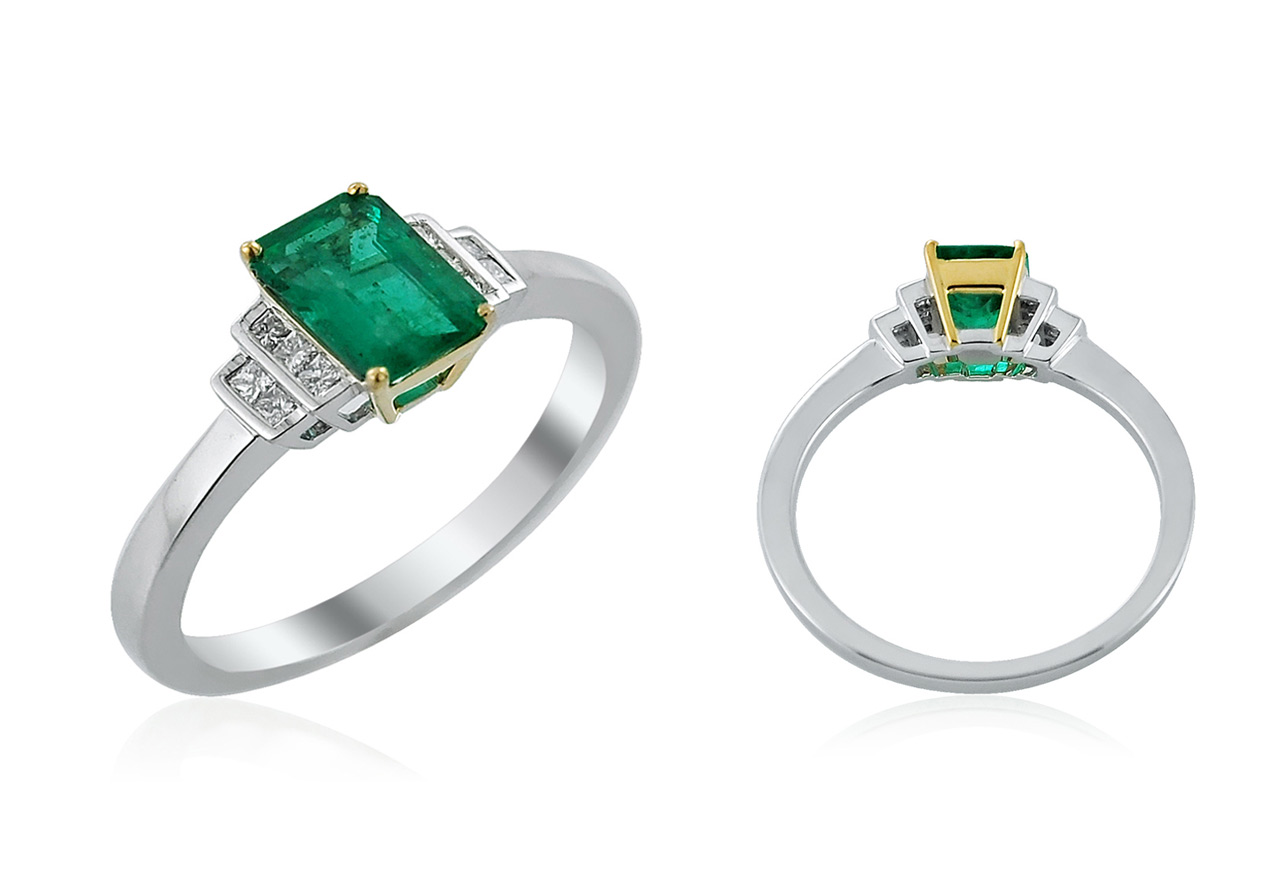 Our guide to caring for emerald rings will tell you everything you need to know about looking after these soft precious gemstones, and their settings.

6. They are thought to have special qualities

According to ancient folklore, putting an emerald under your tongue would help a person see into the future. Wearing emeralds was also thought to guard against memory loss and enhance intuition. And, if you wanted to know if your lover’s promise was true, it was believed that emeralds could act as a type of truth potion, helping to decipher if they were being honest.

7. Emeralds with the royal seal of approval

From Cleopatra to the Duchess of Cambridge, there’s something about royalty and emeralds. In 1845, Prince Albert commissioned a gothic-inspired diamond and emerald tiara for Queen Victoria. Made by royal jeweller Joseph Kitching, it featured 19 inverted pear-shaped emeralds, the largest of which weighs 15 carats. For the spectacular Delhi Durbar in 1911, Queen Mary wore a stunning Art Deco emerald choker that would later be given to Princess Diana as a wedding gift from Queen Elizabeth. Modern-day British royals are huge fans, too. The Duchess of Cambridge has a suite of emerald and diamond jewels that includes earrings, a necklace and bracelet. And when Princess Eugenie married Jack Brooksbank in 2018, she wore the Greville Emerald Kokoshnik Tiara, decorated with six emeralds on either side. Created by Boucheron in the Russian imperial 'kokoshnik' style for society host Margaret Greville in 1919, the tiara was the bride's 'something borrowed', as it was on loan from the Queen. She paired it with diamond and emerald drop earrings that were given to her by her groom.

Not quite royalty, but as good as Stateside, John F Kennedy chose a two-carat diamond and two-carat emerald baguette ring when he proposed to Jacqueline Bouvier in 1953. Designed by Van Cleef & Arpels, the ring set the future president back a cool $1 million. After Jackie’s death, it was donated to the John F Kennedy Presidential Library and Museum. For the couple’s 10th wedding anniversary – the same year he was assassinated – the President chose emeralds again, commissioning an eternity ring featuring 10 stones to represent each year of their marriage. Of course, no line-up of famous jewels would be complete without something belonging to Elizabeth Taylor. Passionate about all gems, the Hollywood legend had a number of emerald pieces and, in 2011, an emerald pendant necklace owned by her sold for $6.5 million, that’s about $280,000 paid per carat.

It might not be Elizabeth Taylor's, but this emerald pendant is still guaranteed to turn heads.

Last year, when stars attending the Golden Globes dressed in black to support the Time’s up movement, many of them chose to adorn their monochrome gowns with emerald jewellery. Coincidence? Or intentional? No one knows for sure, but since emeralds have long been considered a symbol of hope, renewal and growth, it’s entirely possible Debra Messing, Zoe Kravitz, Catherine Zeta Jones, and Ashley Judd used their jewels to make a statement.

It’s 80 years since the blockbuster fantasy musical The Wizard of Oz was released, but did you know that in the original book by L. Frank Baum, published in 1900, the Emerald City was “no more green than any other city”? As the story goes, it only appeared so because its residents were required by the Wizard to wear green-lensed spectacles to protect their eyes from its “brightness and glory”, thus tricking them into believing the city was made of emeralds. By the time Baum’s tale made it to the big screen in 1939, however, the city was portrayed as a sparkling metropolis built of precious green gems, no doubt to make full effect of the film’s use of Technicolor.

So, if you’re looking for something with which to express your love and perhaps imbue some added meaning, follow the famous and choose mysterious, mesmerising emeralds. Why not check out our collection of stunning emeralds and gemstone jewellery featuring the rarest of precious gems? Your friends will be simply green with envy…