What are Asscher Cut Diamonds?

Many people feel that Asscher cut diamonds are one of the greatest cuts of diamonds that were ever created.

The history of the cut dates back to the early 20th century by the Asscher Brothers of Holland. The cut is nothing more than a modification on the most popular cut of the previous century known as the cushion cut.

The Asscher Brothers, who cut many of the named diamonds for royalty, came up with a cut that is square to rectangular with a flat table along with many small step cuts along the top area, and larger longer facets underneath the diamond.

The Asscher cut is definitely a cut that is made to draw the eye toward the diamond centre and give the diamond depth.

Rarity Asscher cut diamonds are very rare and usually finding one will involve quite an adventurous tour around estate sales and private auctions.

Good Asscher cut diamonds have several key factors which impact the true beauty and elegance of a brilliant diamond. Some of these elements include the width and depth of the stone, the symmetry and the alignment of a diamond’s facets, and the polish.

A diamond’s clarity is a measure of a diamond’s blemishes and inclusions which will also affect how one may view the extraordinary brilliance of the Asscher Cut diamond. 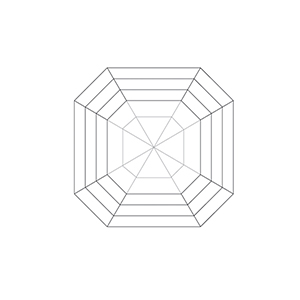 The Asscher Cut reached its peak in popularity in the 1920s and was very limited in production. As mentioned before, it was very difficult to come by up until 2001 when the Asscher cut went through a comprehensive research and development campaign and was later unveiled with new specifications and additional facets for a show-stopping gorgeous shine.

Since the Asscher cut was re-invented, they have become one of the most demanded cut of diamonds - now more than ever. This is definitely one of the cuts of diamonds one would be looking for if they want to show off a sense of elegance and flare while showcasing the diamond’s tremendous lustre.

The Asscher cut diamond needs to really be seen in person to allow the beauty of this sophisticated cut to be appreciated. You will pay up to 20% more for a Royal Asscher cut diamond, but many people feel that it is worth the cost.