Marquise cut diamonds are not as popular as princess cut or round brilliant but they do have a loyal following who adore this cut of stone in their diamond jewellery.

There is history behind this cut of diamond that many may not be aware of. In France during the eighteenth century, King Luis XV ordered that a diamond be cut in such a way that would resemble the lips of Marquise de Pompadour who was his lover. The cut that came from this demand has come to be called the Marquise cut.

Jewellers sometimes refer to this cut as a Navette cut. In the 1400s, diamonds were popular gemstones in jewellery made for royal people. It is one of the various types of cuts that have been developed over the years. The best way to describe a Marquise cut stone is a stone that is oval shaped with points on the ends.

Because of the history of the Marquise cut, they are popular in engagement rings. Rings set with Marquise cut diamonds make the finger of the wearer appear more slender, which is not the case with a traditional round cut stone. 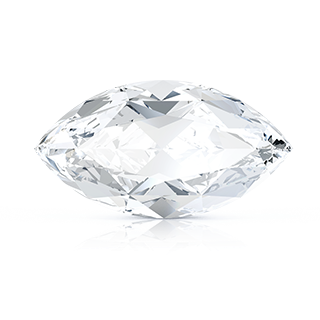 Many women love a Marquise cut stone because there are so many options available for having the ring set. It can be set in a ring so that the ends point vertically on the finger or it can be set so that the ends point horizontally on the finger. One thing that should be remembered when choosing jewellery with a Marquise cut is that the pointed ends should be protected. If the points are not protected, the diamond could be damaged or chipped. Claws should surround the ends of the Marquise cut as much as possible.

Another thing that should be considered when purchasing a Marquise cut stone is that you should look for one that has a minimal bowtie effect. A bowtie effect is where there is a dark spot in the middle of the stone.

A Marquise cut of stone makes beautiful diamond engagement rings, which is how they are most commonly seen. Anyone who is a fan of history will certainly enjoy the history that is behind this beautiful cut of diamond.