If you were born in the month of October, then your birthstone is the intriguing gemstone tourmaline. 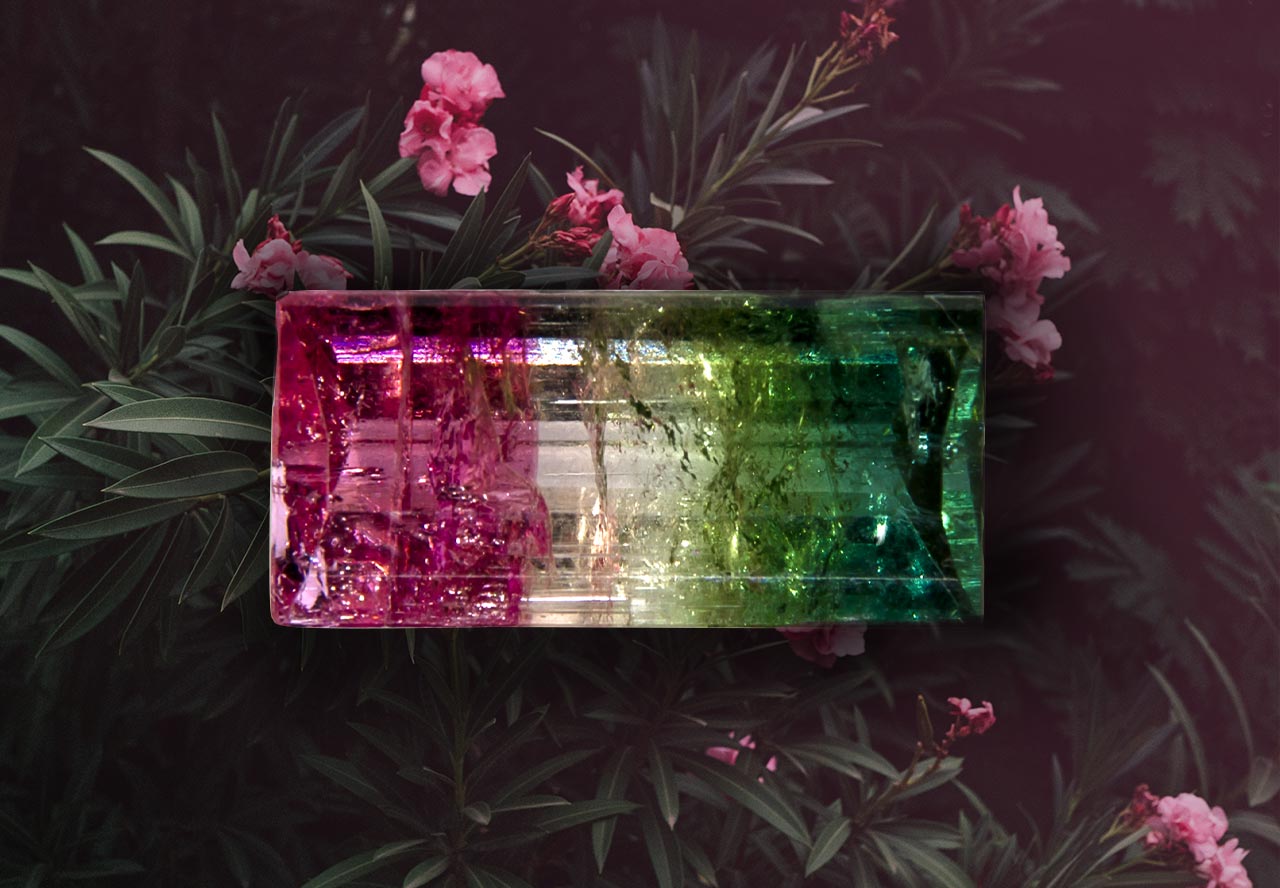 Tourmaline is one of two birthstones for October babies (the other is opal) and is up there among the most colourful gemstones in the world. Its name comes from the Sinhalese (Sri Lankan) term turmali meaning stone of mixed colours. Unsurprising given that the semi-precious stone is available in every colour of the rainbow, from radiant red through to vibrant violet. At one point in time, every colour of tourmaline was given a different name. These days, though, all stones are referred to generally as tourmaline with the colour added as a prefix, such as ‘pink tourmaline, ‘blue tourmaline’ and ‘green tourmaline’. 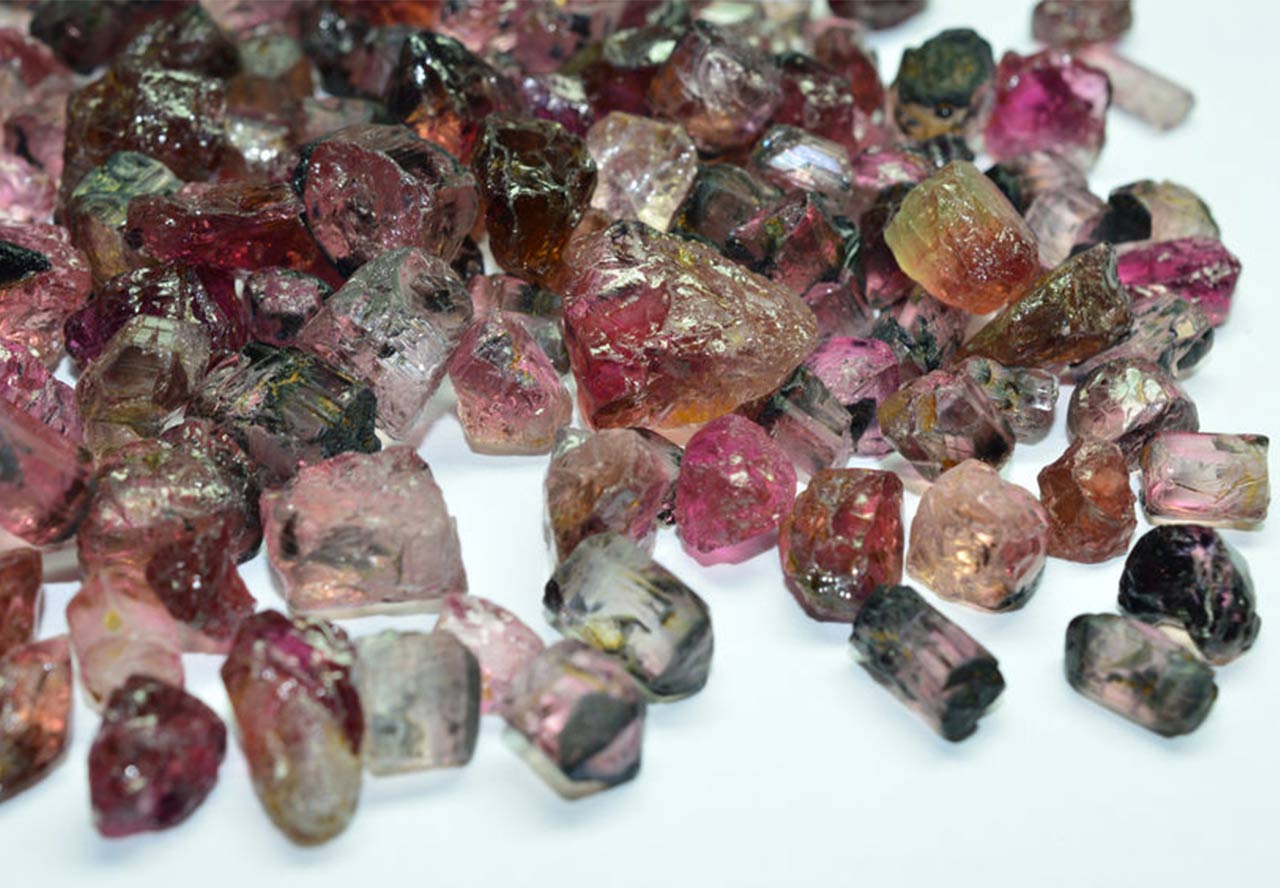 The gemstone isn’t just found in single colours though. It can also take on multiple colour combinations. The stones that exhibit a wide range of colours are usually more valuable than their single-coloured counterparts due to their uniqueness. For example, the Watermelon Tourmaline which features green, pink and white colour bands. The gemstone is cut into thin slices with a pink centre, a white ring and a green edge, making it look just like the fruit. 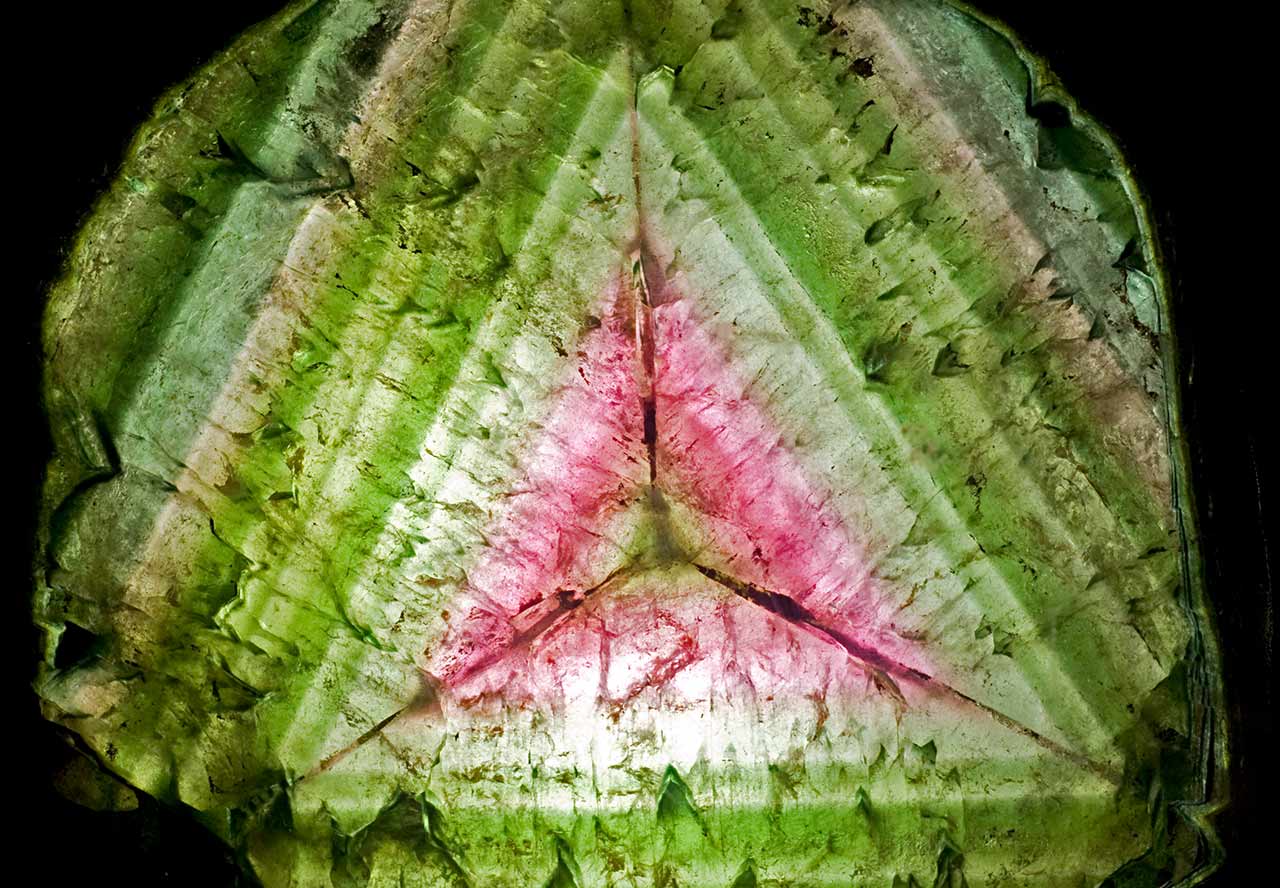 By Eva K. via Wikimedia Commons Thanks to the variety on offer, there truly is a tourmaline to suit every preference, so those lucky enough to be born in October are sure to find something to suit their personality. Tourmalines symbolise a raw and strong connection with nature, encouraging peace, compassion and friendship. For centuries, cultures around the world have held different beliefs about the power of tourmaline and the virtues it can bring to those who wear it. The gemstone also features in a variety of folklore. 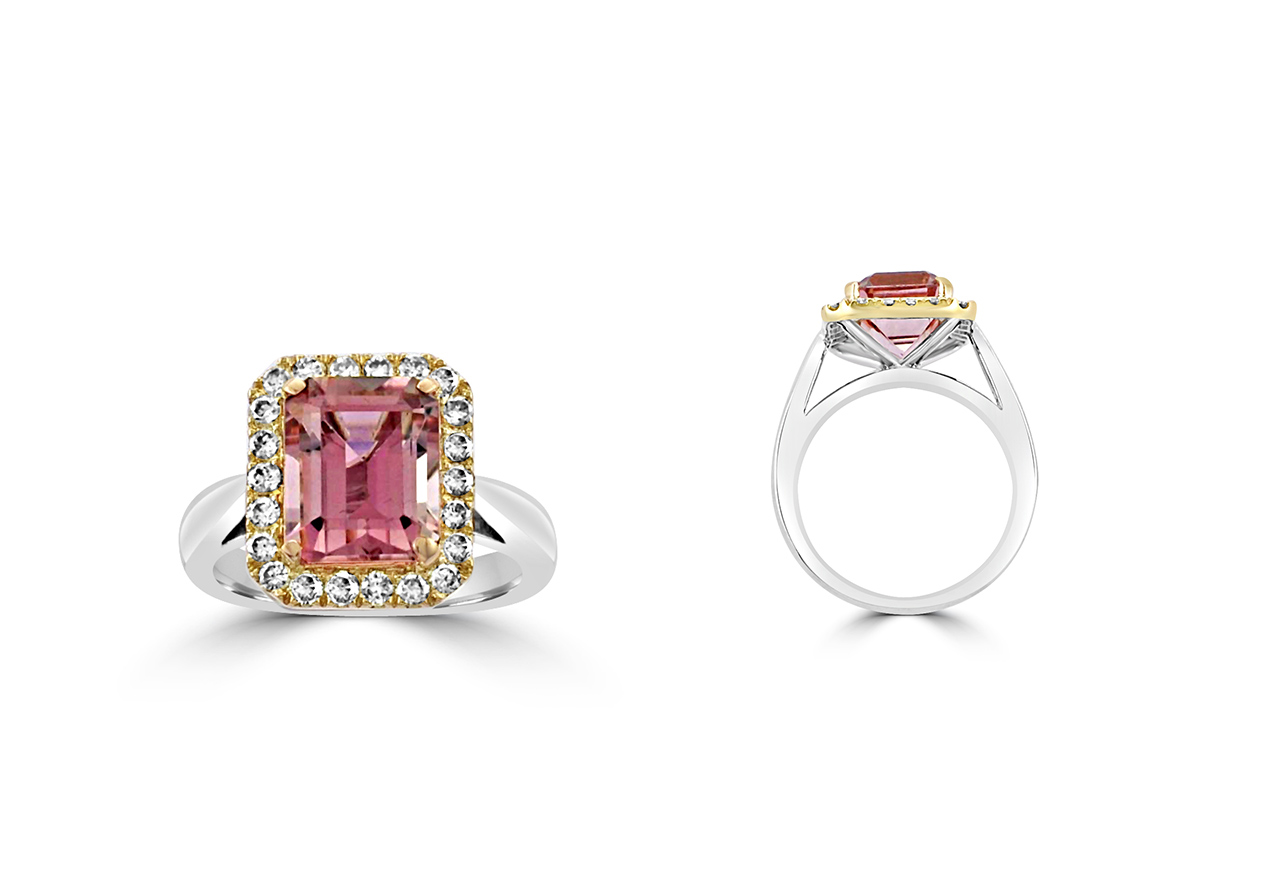 In ancient Indian ceremonies the gem was used to reveal who or what was the cause of troubles or evil deeds. Alchemists believed it to be related to the philosopher’s stone and that it would grant enlightenment and transform metals into gold. In ancient Egypt, meanwhile, it was thought that tourmaline was able to come in so many different colours because it travelled across a rainbow during its creation, picking up all of its colours along the way. Nowadays, the gemstone is used by Native Americans, tribes in Africa and aboriginal groups in Australia as a charm to protect them against all dangers. 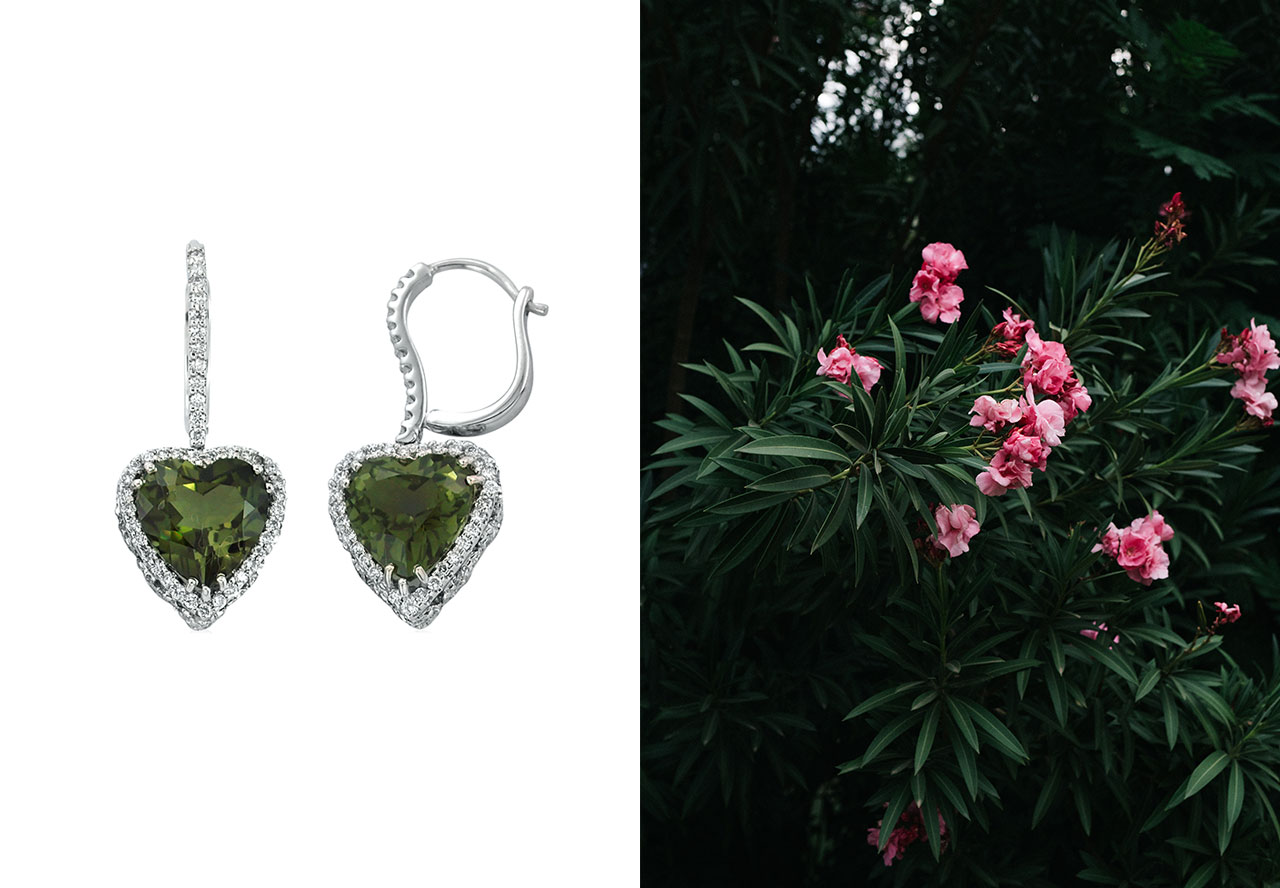 Different colour tourmalines are seen to represent different qualities. Black tourmaline, for example, is a stone of protection. Pink tourmaline represents a love for humanity and is worn to promote sympathy towards others. It also carries the virtue of unconditional love and friendship. Some people believe that tourmaline can help to keep the digestive system healthy, support weight loss, reduce water retention and improve circulation, as well as strengthen bones and teeth. In crystal healing, it is also used to treat stress and trauma. The stone is thought to have been first discovered in Brazil in the 1500s by the Spanish Conquistadors. At the time, these tourmalines were thought to be emeralds and rubies, due to their brilliance and the array of colours. It wasn’t until the 1800s that scientists realised these stones were in fact their own standalone type of mineral. 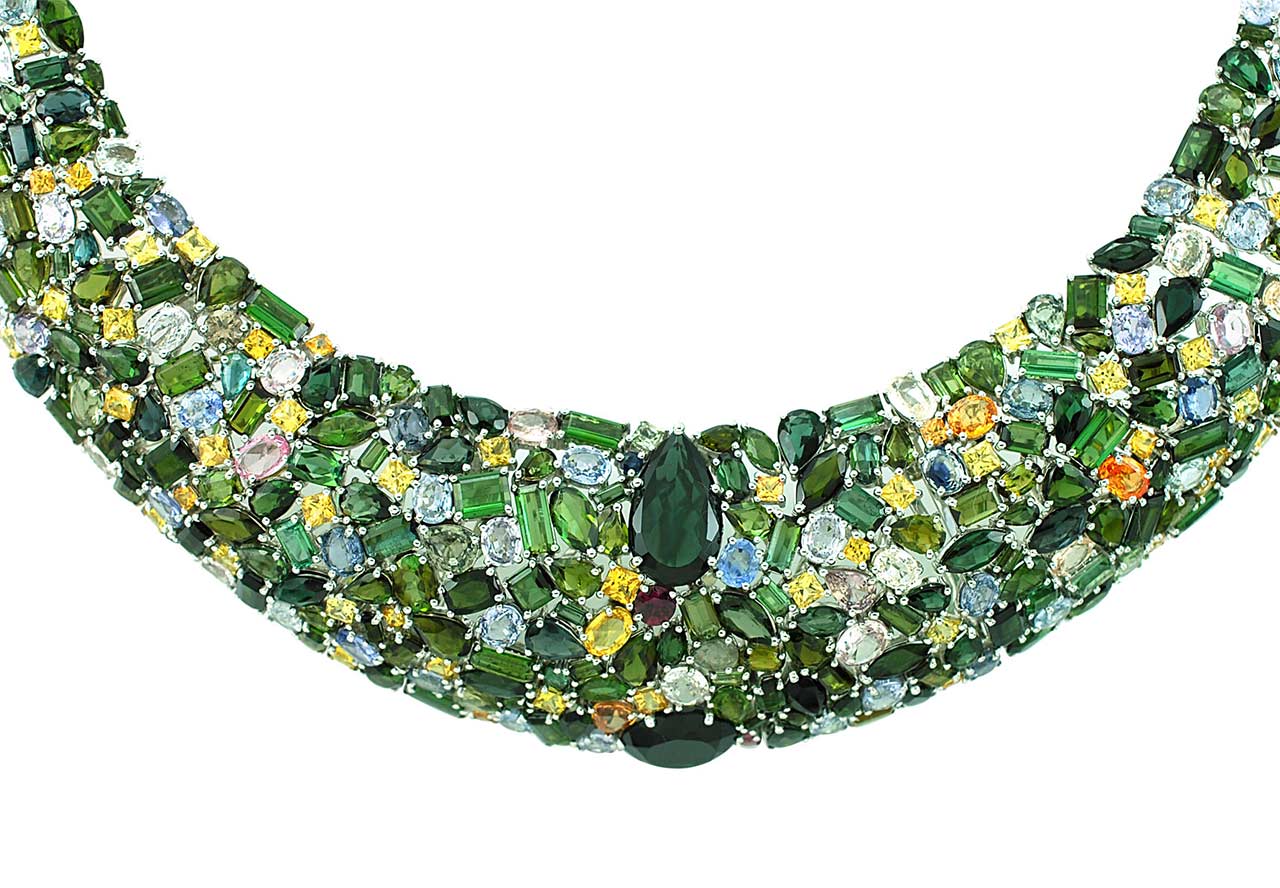 Our 79Ct Sapphire & 128Ct Tourmaline Necklace In 9K White Gold The similarities between pink and red tourmalines and rubies were so strong that the stones in the Russian Crown Jewels, believed to be rubies for centuries, are now thought to actually be tourmalines. Tourmalines have a very complex crystal structure and when heated or rubbed acquire an electric charge, attracting small particles such as dust. Many of the gemstones exhibit polarity, meaning that the colour, electrical properties and crystal forms are different at either end of the crystal.

Multicoloured tourmalines have to be cut very precisely so that all the colours can be seen in the same cut. The monetary value of tourmaline varies enormously; the most common colours such as pink, red, green and blue can be fairly inexpensive. However, the rarer and more exotic colours command very high prices. The most expensive form is the rare neon-blue variety known as Paraiba Tourmaline. Due to its rarity and the recent spike in popularity in a very short space of time, the cost for this gemstone has shot through the roof, reaching tens of thousands of pounds per carat. 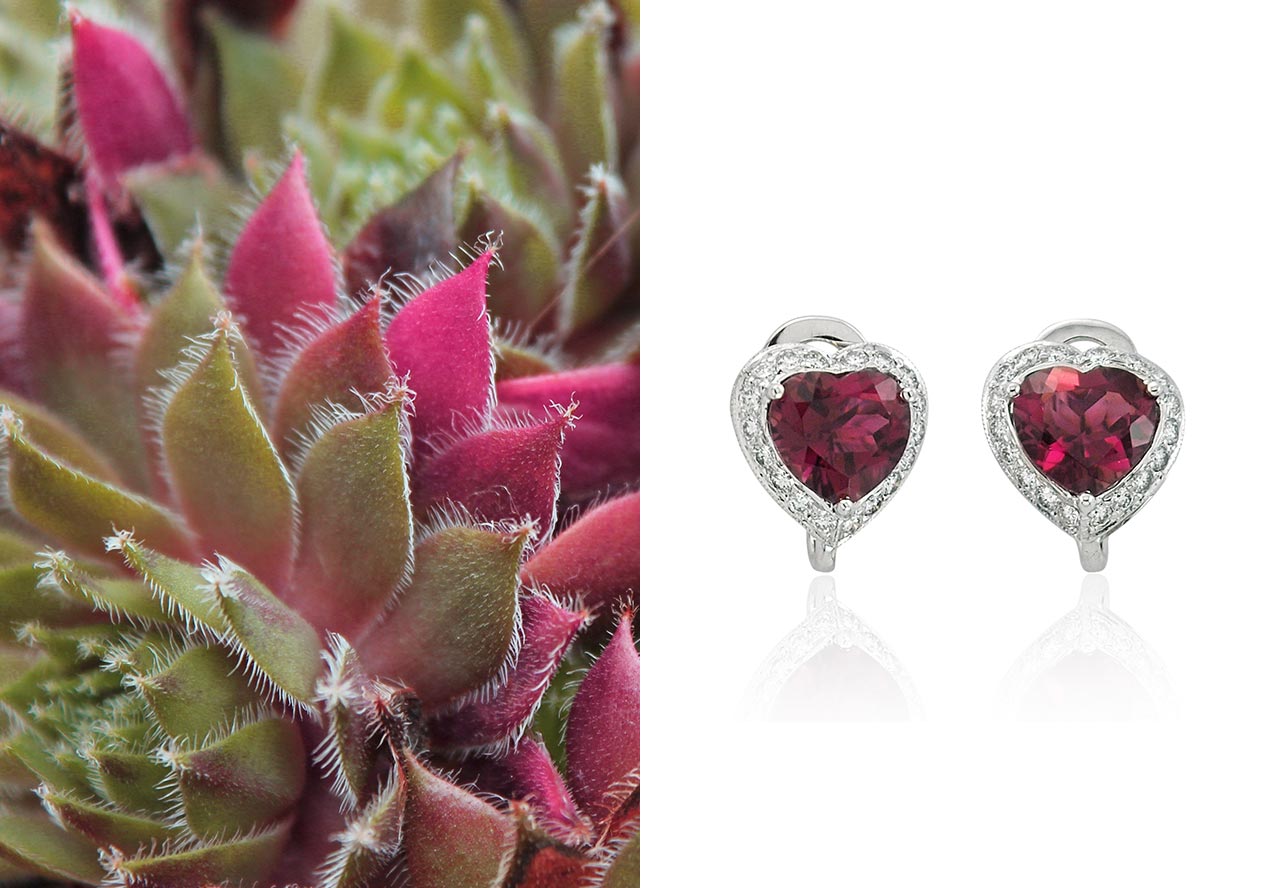 Tourmaline is found around the world, with large deposits in Brazil, Afghanistan, East Africa, and the US. It is also found in Sri Lanka, Myanmar, India, Bolivia, Tanzania, Nigeria, Madagascar, Russia, Greenland and Italy. Notable fans of the multicolour gemstone, particularly the Paraiba Tourmaline, include Emily Blunt, Sofia Vergara and Naomi Campbell. If you or your loved one were born in October, tourmaline is the perfect gift to promote safety, peace and compassion. Thanks to the magical variety of colours on offer, there is a tourmaline out there to suit every October baby.